Every month we celebrate one of the clients of Affinity Home Care Agency. It is not an easy task to select one of the incredibly valuable and interesting clients that have become honorary family members. We always look forward to hearing their stories and learning about their lives.

This month we have the distinct honor of highlighting Mr. David Brendel. David and his wife Shirley have lived in metro Detroit for their entire lives.  David says his favorite place they have lived is in White Lake; where they are now. They raised 4 children, 2 sons and 2 daughters. They had several dogs and cats in their home as they raised their family. They are down to one cat now. They are proud grandparents to 9 grandchildren. However, Shirley likes to say, “10 grandchildren” because one grandchild is married, so they gained a 10th grandchild! Three of their grown children live around metro Detroit, but one son lives in Iron River, in the UP of Michigan.

David was drafted into the Army during the Korean War and served active duty for 2 years.  During that time David was stationed at the DMZ, the demilitarized zone. We all thank David for his service to our country and we are in awe of the service he performed as a young man. The Brendel’s oldest daughter also served in the Army and was stationed in Germany. What a legacy of service! Thank you!!

After David’s service, he entered the skilled trades and worked for more than 30 years for General Motors. I am sure he has seen many changes through his time at GM and through today in the automotive industry. Maybe David’s experience at GM fueled a love for driving and travel. The Brendels have great memories from raising their children and camping in tents as a family.  They still love to travel. Shirley and David have created even more travel memories beyond the family camping days. They took a trailer camper all the way to Alaska. Now they have an Airstream they have taken all the way to the Panama Canal!  Can you imagine? Not many people can say they have camped exploring not just the country, but the continent; all the way from Alaska to the Panama Canal! That is incredibly exciting!

Shirley made sure to tell me that Affinity Home Care Agency has been a wonderful help for David. They have the services of an occupational therapist, Debbie, and a physical therapist, Dawn, that have been tremendously helpful for David. Shirley says she is very grateful for the great care David receives in their home. After spending some time speaking with the Brendels, I bet both Dawn and Debbie would agree that they are very happy to be welcomed into the Brendel home.

Congratulations to David Brendel for being the September Affinity Home Care Agency Client of the Month. Thank you Mr. Brendel for your service to our country and thank you for letting us get to know you and Shirley!  The pleasure is all ours. Welcome to the family! 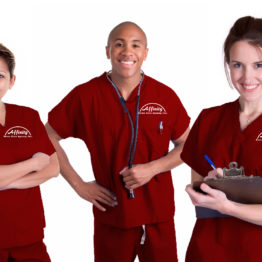